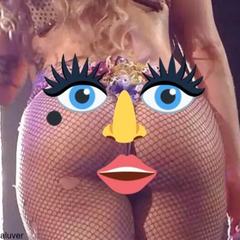 I don’t think so. Recording Gucci movie is coming and I don’t think there can be more of chromatica. I don’t believe the rumor that the Babylon video was already recorded. So this era it’s over for me. And it makes me kind of sad. The last thing I expect is a performance on BLACKPINK’s THE SHOW.    I think I’m the only one who enjoys the singles on tours 😭💔  THIS! She even said on the Apple Music Interlude that she wasn’t feeling good during recording sessions, that was bloodpop

visuals = some of her best - SL MV could've been better with outfits but still solid and loved the concept - rom and 911 flawless Album = such a fun album that i think is better listened to over speakers - I do think it could've been a lot more smoother and less noisy in places as well as sounding fresher - i think they could've released a better lead single that had a more clubby production vs. a more 80s one. critically it is one of her best, commercially will end up he rbest performing s